Skip to content
No products in the cart.
$0.00 Cart

How to Fold a Flag: A Step-By-Step Guide for a Great Display 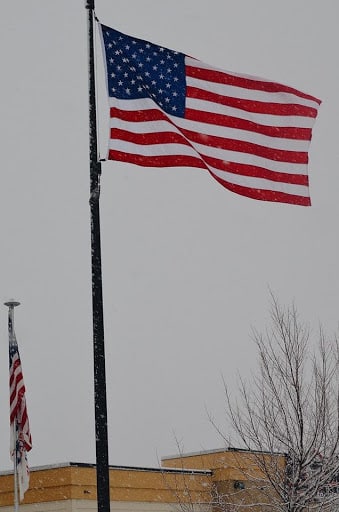 The stars and stripes. Old Glory. Can you think of a more easily recognizable national symbol than the American flag?

From its first version in 1777 to the modern version flown proudly from government buildings, schools, and military posts across the country and around the world, our grand old flag still flies.

Yet many are unaware of basic rules set forth by the Flag Code and tradition, including how to fold a flag. These rules are important for basic care and honor for American flags.

The 13 Folds of Flag Folding

You may need to fold a flag daily, when taking it off your flag pole, or on special occasions as part of a ceremony. Whenever you fold the flag it is important to keep in mind the meaning of each fold and how this relates to our duties as a U.S. citizen.

These meanings ascribed to the folds are based on historical, religious beliefs and are typically used in references to flag folding ceremonies at veteran funerals.

Though these meanings may not be something you dwell on each day as you lower and fold your personal flag, it is important to keep their significance in mind.

Rules for Flying the Flag

If you have a personal flagpole, it is important to know how to properly fold a flag and care for it. There are several steps to follow including weatherproofing, lighting, and how to fold a flag by yourself.

Any flag erected outside should be an outdoor, weatherproof flag or taken in during bad weather. It should be lit if left out overnight. To maintain the flag and store appropriately, it should be properly folded when taken down.

It is essential, in all of these duties, not to let the flag touch the ground.

Who Gets Flag-Draped Coffins?

If you have ever attended the funeral of a soldier or veteran, firefighter, or police officer, you may have seen their coffin draped in a flag. During the ceremony, participants remove and fold the flag. It is then presented to a family member – often a parent or spouse – of the deceased.

These folded flags can be kept in triangular cases on display as a tribute to the deceased. How to fold a flag into a triangle is a good skill to know for displaying the American flag.

In truth, any American can have their coffin draped with a flag during the funeral ceremony. Though it is typically done by those who gave some service to the country, any patriotic citizen is permitted the honor based on the Flag Code.

How to Fold a Flag: Step-by-Step Directions

Folding a flag to make a triangular display involves a few simple steps with a partner or by yourself. When properly done, the flag should be folded thirteen times.

How to Fold a Flag with a Partner

Grasp two corners of the flag on its short side. Your partner should do so as well. Pull taut.

Fold the flag in half once, lengthwise, by bringing the lower striped side to meet the upper edge.

Each gripping two corners, one folded and one open, fold the flag in half lengthwise again. The field of stars should remain visible on the outside.

Beginning at the right end of the stripes, fold the folded edge in a triangular fold to the open edge.

Take the point made at the end of the flag and fold inward to make another triangular fold.

Repeat the triangular fold until reaching the end of the blue field of stars.

A triangle will be formed with the last fold. One person will let go. Straighten up the edges to make sure that everything looks neat.

If done during a ceremony, present to the recipient.

How to Fold a Flag by Yourself

Hold the flag from the short, striped end at each corner.

Bring your left hand to your right, folding the flag in half lengthwise.

With your left hand on the folded end, fold the flag lengthwise again. Neaten up any of the edges. Verify that the blue field is on the outside of the bottom edge.

Repeat the triangle folds down the length of the flag until one final fold in the blue field.

Now that you know how to fold a flag, put it on display. When not displayed as a neatly folded triangle, fly your flag in the gentle breeze at the top of a Titan telescoping flagpole. Shop Titan at the Flagpole Farm today. 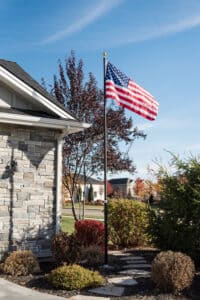 Do you think you’re doing enough to show your patriotism for America? Read on to see why installing  house flag poles in your front or 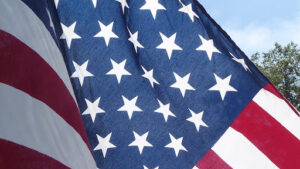 Are you in the market for telescoping flagpoles, but unsure of where to look for help? If so, then you need to learn all that